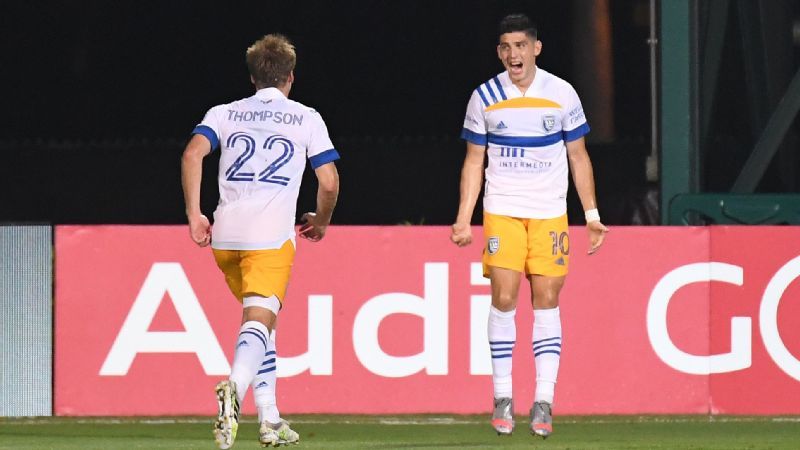 Magnus Eriksson converted two second-half penalty kicks, and the San Jose Earthquakes scored four times after the break to advance to the quarterfinals of the MLS is Back Tournament with a 5-2 victory over Real Salt Lake on Monday night near Orlando.

Eriksson was also credited with a secondary assist on Cristian Espinoza‘s first-half goal for the Earthquakes. Vako and MLS career goal-scoring leader Chris Wondolowski added second-half goals for San Jose, which has won three straight in the event at the ESPN Wide World of Sports Complex.

The Earthquakes will face either Columbus or Minnesota United FC on Saturday night in the quarterfinals.

Douglas Martinez scored in the first half and Damir Kreilach pulled one back in the second for RSL, who have lost two in a row.

Espinoza was active early in the final third, and he eventually was rewarded for his efforts in the 21st minute. His nifty cross-body strike from the near side beat Salt Lake keeper Zac MacMath to give San Jose a 1-0 lead.

However, just 73 seconds later, RSL leveled the match. Off a San Jose defensive breakdown in its own third, Martinez found himself one-on-one with keeper Daniel Vega, and he needed only a chip shot into the empty net.

San Jose, though, got the opportunity to retake the lead after Salt Lake’s Alvin Jones made enough contact to bring down Tommy Thompson in the box on 48 minutes. A minute later, Eriksson struck from the spot, off the hand of MacMath and into the top right corner of the net.

Just past the hour mark, Vako, who also had an assist, extended the advantage for the Quakes off a nifty cross from Andres Rios.

After missing on at least two quality chances, Kreilach finally came through for RSL in the 75th minute to make it 3-2. Salt Lake, though, went down to 10 men after Marcelo Silva received an 84th-minute red card for an aggressive tackle.

Two minutes later, Wondolowski converted an easy tap-in for his 162nd career goal. Thanks to a Kyle Beckerman hand ball in the box, Eriksson converted once again from the spot in the seventh minute of second-half stoppage time to complete the rout.

Juventus and Pirlo are gambling that the club legend can get the best out of Ronaldo & Co.